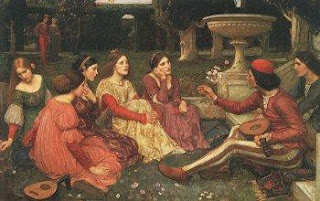 
Pathological narcissism is described as an Escape from Reality. An escape made possible by unconscious ego defenses protecting narcissists from fearful emotions perceived to be insupportable. Rather than tolerating the angst of human imperfection, narcissists shield themselves with a False Self safeguarding a wounded inner core.

This means it is extraordinarily challenging for narcissists to break though rigid defenses in order to accept their personal limitations, powerlessness, mistakes & ignorance, or face the ultimate loss of control: mortality. By avoiding legitimate suffering for the human condition, narcissists exist within a ‘filtered truth’ manufactured by psychological defenses distorting their perceptions of reality.

Though NPD is rare (0-.4% of the general population), narcissistic traits and unhealthy narcissism are universally inherent. This is particularly true during an emotional crisis or trauma. Our natural reaction to significant losses entails a grieving period during which psychological defenses protect us from too much pain, too soon. Everyone uses defenses intermittently, including denial, rationalization, projection, intellectualization, dissociation, etc. Over time, our defenses lessen and we adjust to the inevitable losses of life.

The important thing to remember is that Narcissistic Personality Disorder is a constellation of enduring traits, patterns and behaviors that have always been present. Narcissists' defensive behaviors are manifest to a lesser or greater degree in reaction to the vagaries of life.

True Self and False Self

True Self/Authentic Self: Our true identity, “who we really are”, sometimes referred to as the Child Within

False self/Unauthentic Self: A mask of “who we pretend to be” functioning like an anesthetic to intolerable feelings of guilt and shame

Because conscious awareness of inner deficits is threatening, the narcissist constructs a False Self in order to defend the fragile True Self. Because their core self is weak, narcissists are overly dependent on other people and situations to regulate their fluctuating self-esteem. This unstable self-esteem leads to Idealization of other people, what we typically define as "putting someone on a pedestal". Unfortunately, what goes up, must come down, and Devaluation is a mighty hard fall for most of us.

Sustaining a False Self requires an enormous amount of energy; thus, narcissists are susceptible to a Jeckyl-Hyde split between the image they work hard to project, and reactionary, impulsive behavior. This confusing split may occur if their narcissistic rage is triggered, a rage that is common to most people with personality disorders. And that narcissistic rage is one reason why:

Narcissists aren't waiting in the lobby with them, though. Friends and families are the ones who believe themselves to be crazy. Most of the time, narcissists are only too willing to agree with their self-diagnosis! Though a person with Narcissistic Personality Disorder may seek treatment, it’s important to state that the prognosis for cure is dependent upon their degree of pathology. If someone is diagnosed with malignant narcissism, the prognosis for cure is poor. Numerous psychologists suggest that malignant narcissism is in fact, incurable.

From infancy to old age, we mature our underdeveloped narcissism. In childhood, narcissistic self-involvement is considered to be 'age-appropriate’. If our childhood is good enough, we separate from our primary caregivers, differentiate ourselves from others, and learn to trust reliable connections to our parents and extended social network. Throughout our childhoods, we develop emotional intelligence, resiliency, empathy, a sense of right and wrong, core values and self-esteem. By learning who we are, we shape and reify a True Self. A self that is strong enough to resolve primitive defenses preventing the natural maturation of healthy narcissism as adults.

This is a brief list of Age-Appropriate narcissism in children: grandiosity, entitlement, impulsivity, manipulation, egocentricity, vulnerable boundaries, magical thinking, fantasy, neediness, desirous of attention, admiration seeking, and a belief that other people exist to serve the child.

In childhood, omnipotence and grandiosity are typical behaviors, attitudes and feelings. While it’s perfectly normal for three-year olds to believe they are Super Heros, it’s pathological for adults to be unaware of their limitations.

Sound like anybody you know? Nah....ya don't say!
Healthy Narcissism

"Healthy adult narcissism is characterized by empathy, a sense of humor, creativity, wisdom, sense of personal responsibility, the capacity for developing and maintaining satisfying intimate relationships and altruism." ~Nina Brown

Everyone experiences temporary setbacks during painful losses. We revert to defensive behaviors, including self-absorbed reactions to uncontrollable events in our lives. By accepting our vulnerability, we eliminate unhealthy narcissism and break through Age-Inappropriate grandiosity. Our defenses gradually lessen after an temporary period of healing. The True Self is reified by moving towards self-actualization though the recognition of human limitations. If we are lucky, we will be humbled by a day of reckoning, not broken.

Pathological narcissists do not self-actualize in the same manner. They learn to cope within the restrictions of their disorder, but they continue to struggle with egotistical reactions since ego defenses are automatic and for the most part, unconscious.

Without the capacity to empathize deeply with other people, the narcissist lacks internal brakes preventing him from serving the False Self first and foremost. When people are harmed as a consequence, narcissists protect illusions of perfection by disregarding their negative impact as an irrelevancy.

"Besides", the False Self lies, "They deserved it." And nobody believes their own lies more than the narcissist.


shallow emotions lack of empathy indifference to others strong admiration and attention needs a strong self-focus and self-absorption unresponsive to others needs or concerns grandiose, arrogant and contemptuous consideration of oneself as unique and special an inability to relate to others in a meaningful way an inability to grasp one's core self as there is nothing there

Because of the complexity of the Narcissistic Personality Disorder diagnosis, it is important to use less restrictive terminology while discussing narcissistic relationships. By adopting Dr. Brown's terminology of the DNP (1996), we remain focused on the impact of the narcissist's behavior rather than concentrating on a a precise diagnosis of the Narcissistic Personality Disorder. It would be useful to have an accurate diagnosis, that's true. But narcissists are notorious for avoiding psychological treatment, or submitting themselves to a diagnosis. If narcissists are self-reporting in the off-chance they do see a professional...well, there ya go. How reliable can narcissists be when self-protective defenses are in charge of their reality? More than likely, the image they project is one of high self-esteem and confidence.

By using Dr. Brown's terminology, we can determine whether or not someone with Destructive Narcissistic Patterns is capable of reciprocating respect, empathy, and commitment. Any relationship lacking mutual respect, empathy and trustworthy commitment will be abusive to some degree.

Abuse, even mild abuse...is detrimental to our self-worth and integrity.

Kathi Stringer, Characteristics of the True Self and False Self
http://www.toddlertime.com/interest/true-false-self.htm

Vaknin, Sam. The Dual Role of the Narcissist's False Self
http://samvak.tripod.com/faq48.html