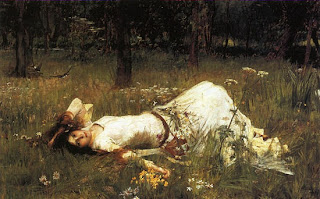 Well, I was working really hard the other day, just like this image of Ophelia...and it occurred to me that a Psychology Dictionary might be a useful addition to my blog.

I remember how confusing it was when writers used unfamiliar words. For a couple of years, I kept a psyche dictionary on my lap, about three dozen sticky notes and a legal pad of yellow paper filled with terms it was important to memorize. One way or the other, I was determined to figure out what psychologists were talking about because one way or the other, I was not going to stay in mortal hell.

I'm a rather obsessive personality, burrowing into topics for ages before poking my head out of the tunnel to see what year it is. Not too many people have a similar inclination, enough time, or the patience to do such a thing. If I use a term that is unfamiliar to anyone, please reference one of the following psychology glossaries and then, tell me to knock it off.

You can browse Psyche Central's definitions, though they aren't exactly user-friendly. For example, let's say you are uncertain about what it means when someone is in an 'Irritable Mood'. (As if we need anyone to explain that to us.) Click on Irritable Mood and Psyche Central offers a precise definition:

SEE? How much clearer could anything be? So next time someone in your family is an Irritable Mood, you can impress them with your psyche-smart education and say, "Did you realize you were in a prolonged state of negative reactivity?"

I might not suggest doing that with egomaniacs, however.

If you ignore my advice because you believe narcissists will finally GET IT, consider reading about Magical Thinking. If you still insist on teaching narcissists what you've learned about psychology, you'll earn a hard lesson in Reality Testing. You may also bear witness to narcissists' persecutory delusion that you are messin' with their heads and there ain't nothing wrong with the wiring in their brains.

Oh well, at least you'll gain Insight about psychopathology and the creation of healthy boundaries. In other words, learn for yourself and let narcissists do the same. Which they won't. But then again, psychology has a term for that, too: Repetition Compulsion.