What Is It About Mary? 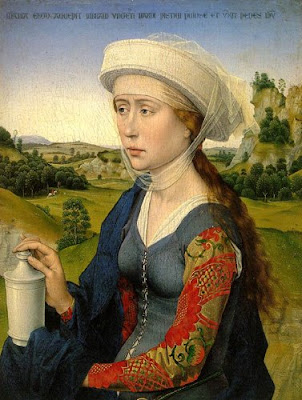 An essay on unsightly gardens

Mary, Mary Quite Contrary
How does your worthlessness grow?
With scams, shams & "no thank you ma'ams"
And insults lined up in a row


Mary Quite Contrary created a beautiful garden cultivated from an imagination fueled by passion for flowers. An occasional weed interfering with her garden plan was not a problem. Mary could pluck a single weed in two minutes flat. Three weeds took more energy but her spirit remained undaunted. She continuously steeled her eye towards the future. She could see the roses, touch the roses, and smell the roses. The key to an orderly garden was her consistent implementation of a Weed Prevention Plan. If she could keep noxious weeds from strangling the roots of delicate blossoms, she was sure to reap the rewards of her labor---every ounce of energy and minute of her time would be worth it.

Mary lost herself in thoughts about the future when gnarly stems suddenly tugged at her skirt. She leaned forward pulling a handful of bindweed from the soil and felt a slight headache developing behind her left eye. “O, my!” she thought to herself. “I’m a very busy woman! I don’t have time for a headache.” Determined to prune her roses before the daylight faded, she yanked several more weeds then stood up to view the horizon.

“Ah, I can almost smell the sweet air already!” she sighed. “These flowers had better be everything my Burpee’s catalog said they would be." Then, she spied a thickened patch of knotweed, stinging nettle and quack grass. By this time, Mary was tired. It had been a long day and she didn’t even remember what roses looked like anymore. Mary just wanted to go to bed and start over in the morning.

“Maybe the weeds will disappear tonight," she sighed hopefully.

Still tossing and turning at 2:00 a.m., Mary could not quit worrying. "My garden is so unsightly! Maybe, at the very least, I stopped the biggest weeds from seeding. Those suckers spread like crazy and before a girl even realizes what's happened, her garden turns into a brier patch."

At this point, worn-out Mary was too tired to be contrary. She was obsessing on weeds that weren’t even there.

What is it about Mary?

Well, you know the cliché: "If they can get you to ask the wrong question, they don’t have to worry about the answer."

It’s embarrassing to admit an oppressor we called ‘beloved’ had pushed us around. Most of us are self-blaming if we failed to keep peace in the household or, nurture the healthy growth of a family’s mental health. Whether we cop to gender socialization or not, women continue to be responsible for the psychological well being of their families. Even as daughters, parents expect our devotion; whether or not said parents deserve our loyalty and respect. In general, women accept their roles as primary caretakers for elderly parents whose care taking skills of their own children had been neglectful, even abusive. Women frequently provide care for their spouse’s parents, too.

The implicit assumption that women are the glue to familial relationships holds her accountable for the demise of a compromised, even corrupted system. While traditional roles are being deconstructed, female socialization continues to persuade women to dedicate her efforts towards the benefit of the family system: a subordination of self that is not always reciprocated by her partner. Thus, the quality of her decision to stay is determined by his choice to reject joint responsibility for the creation and maintenance of family.

If longevity determines the ‘success’ of a partnership, her commitment for staying-the-course is deemed virtuous. “What a courageous, wise woman! She never gave up!”

If her partner does not reciprocate mutual commitment, her decision to stay is deemed pathological. “What a dependent, weak woman! She never gave up!”

Pathologise: “To view or characterize as medically or psychologically abnormal”

Pathologizing a man as a narcissist offers explanation and excuse for his behavior. Pathologizing a woman for being his partner accomplishes the same thing. He is excused of responsibility for his behavior and she is accountable for allowing him to behave the way he does. It’s a specious enterprise to judge a woman’s choices based on another person’s agency. If the relationship ends, she feels guilty and ashamed for her inability to elicit commitment and love. This guilt and shame may only be remediable through connection with those who do reciprocate commitment and good will. For the most part, I’d have to say that social validation for her efforts to grow roses in a rock bed is not gonna happen. At least not in the short run.

Without context for a partner’s narcissistic behaviors, a woman ineffectively attempts to mediate conflict, unwittingly diminishing her self-esteem in the process. When a loving relationship fails to flourish, she loses faith in her capacity to impact others. The weeds grow faster than she can pluck. Her sense of self-efficacy diminishes. She assumes her spouse does not value her enough to care about changing his behavior. She battles an inner demon of worthlessness. Accepting the reality of an abusive, unchanging relationship, requires the painful sacrifice of precious illusions giving meaning and purpose to her life. The loss of her beliefs results in a temporary loss of self. If she has always identified with the feminine role, she suffers a cultural betrayal on a level so deep she no longer trusts her perceptions of reality.

According to Schneider and Sadler (2007), the long-term partner of someone with NPD "always presents with layers of post-traumatic stress disorder." With American marriages lasting 6-8 years, long-term might be any relationship lasting more than six months. If you ask an ‘x’ if their narcissistic relationship was long-term, they’ll likely say one year was an eternity.

Which is why it is pointless to ask a woman if she fears abandonment when the fundamental assumptions organizing her life are in question. Her primal fear has been consciously heightened by circumstances. Her response echoes human anxiety about isolation, urging us to foster social connections. Only after stabilizing her life, ought she be queried about residual fears. Given adequate time and compassionate support, she’ll likely say, "What I really fear is marriage." Which even said in jest, serves as justification for another pathology society is aimed to fix: Mary’s male-bashing. She is stuck. In or out of a relationship, Mary's garden is under public scrutiny.

We are susceptible to drawing false conclusions about ourselves. We define past behavior through selective lenses of hindsight. Naturally distraught with grief and loss, our past is interpreted by present emotions leading to distorted perceptions of helplessness, denial, subservience, etc. We view ourselves as broken because of our inability to successfully nurture an intimate relationship: a cultural mandate haunting us like a judgmental super-ego.

My experiences with women like myself have elicited concerns about the credibility of psychological profiles on women who are either in a narcissistic relationship or too soon out. Unhealthy symptoms most likely result from the situational construct; these symptoms are not evidence of a character disorder or mental illness. At this point, there is not enough research to conclude a woman’s unhealthy symptoms preceded her abuse.

I think women’s identification with nurturing attributes ought not be subordinated to masculine values of independence, autonomy and firm boundaries. Most women I know did not tolerate abuse because of masochistic helplessness or martyrdom; but because of her appreciation for the helping role: to care for others; to nurture and support. And I sincerely hope independence, autonomy, and firm boundaries are not the standard by which we pathologise women's experience. Before determining pathological behavior or codependency, it's important to consider the significance of socialization. Nurturing skills facilitate the healthy construction of functional systems but these very same attributes are manipulated, distorted, and demeaned by abusive people.

To be sure, when my spouse was plucked like a stinkweed from the center of my garden, his absence left a gaping hole. But rather than fill the empty space with another man, I planted two dainty feet instead. The only way to stop a Robinia Idahoensis from blooming is to cut her down at the knees, which is exactly what happened to this Mary Quite Contrary. But no matter. She came back from her roots, blossoming more profusely than she ever had before.

Hugs to all,
CZBZ

Schneider, Mary Frances & Sadler, Wendy. Therapy with the Partner of an Individual with Narcissistic Personality Disorder. The Journal of Individual Psychology, Vol. 63, No. 2, Summer 2007

Our Bodies, Ourselves. Midlife and Menopause.
http://www.ourbodiesourselves.org/book/menoexcerpt.asp?id=60