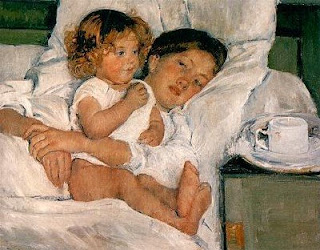 Breakfast in Bed by Mary Cassatt

Ego-dystonic: "is a sign, symptom or experience which the patient finds uncomfortable or doesn't want."

Ego-syntonic: "is a sign, symptom, or experience which the patient finds acceptable and consistent with his personality." ~Nicholas G. Ward

Mothering is a life-altering experience. We're challenged to face our emotional immaturity, consider the long-term impact of our behavior, to become as reliable as reliant children need us to be. I hadn't given much thought to the power a mother has over powerless children, until watching my impatient self react to their demands. It occurred to me in a flash of self-observation: I was acting out of character and didn't like myself very much.

If Mary Cassatt were commissioning portraits today, she'd never ask me to pose for a painting. Who'd buy an all-too-real portrait of an exhausted mother murmuring complaints when her child woke up early in the morning?

Mothering cuts through youthful narcissism if we accept responsibility for our impact on children. If that means going to bed early ourselves so we don't mind snuggling next to a stinky child at 6:00 a.m., so be it. Children can't be expected to accommodate their mother's...ahem...lack of self-discipline. Rather than blaming my kids for being kids, I knew impatience was my problem to fix.

The first step towards eliminating guilt for behaving in a very un-Cassat-like manner, was talking with other mothers like myself. Did they get frustrated? Did they yell? And if so, what did they do to change?

Now this was back in the 1970's when running to a therapist was NOT the typical and norm. We didn't even like therapists back then. The only people who needed therapy were people who were so messed up, they couldn't help themselves. Most likely, we didn't even have a counselor in our local community though I never checked the yellow pages to find out. My friends and I relied on self-help books, tapes and group discussions. One of my friends suggested listening to a ten-tape program on self-defeating behaviors which of course, I was eager to do.

It's fair to say that for me, yelling at toddlers was ego-dystonic. I knew it was nutz to blame my kids for being----kids. Yelling made me feel guilty and fortunately for me, this guilt motivated changed behavior rather than defining myself as a Bad Mommy. At the time of course, I had no idea how mentally healthy it was to question my sanity, rather than rationalizing or projecting the guilt that was mine to bear and mine alone.

A ten-tape session with Dr. Sterling Sills (I think that was the psychotherapist's name...this was a long time ago!), offered insight into why we act the way we do if underlying issues remain hidden from our conscious awareness. I did the grown-up thing and took healthy steps towards positive change by changing 'me'; thus becoming more congruent with myself. I believe I was 26 at the time and yes, that was a long, long time ago. ha!

If I had been comfortable with my behavior (or unwilling to question my sanity), then yelling would be ego-syntonic. There would be no need to ask for help, listen to tapes, talk openly with mothers like myself. I'd view my temper tantrums as perfectly sane considering the annoying toddlers I had to live with! In other words, the problem was them, not me.

I'm guessing most therapists are loath to deal with people who see no fault in themselves, nor question the validity of their perceptions. "Of course I scream at my children!" they might say. "That's how kids are supposed to be treated, so don't try and lay a guilt trip on me!" That would be an example of ego-syntonic behavior. There is no problem with her, you see; the problem is her selfish children.

Thanks to anonymous eyes for encouraging me to examine the meaning of dsystonic verus syntonic behavior. Unfortunately, we're prone to psychoanalyzing ourselves to pieces in an effort to understand our relationship with a narcissistic partner. When we scrutinize ourselves through biased lenses however, we overlook courageous steps we took to confront ourselves: to overcome our past; to take responsibility for the future; to stop the inter-generational transmission of unhealthy parenting.

Though my life did not turn out as expected, my relationship with my children is deeply interconnected and loving. That was no accident. I earned their respect and love because I was willing to face myself.