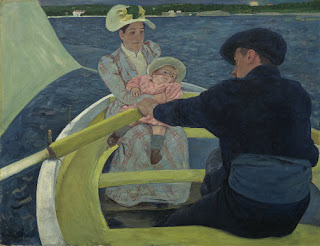 The Boating Party by Mary Cassatt


"Instead, give them your E.A.R.: Your EMPATHY (not sympathy—empathy means you can have similar feelings and frustrations), a little ATTENTION, and RESPECT them for their efforts and positive qualities as a person." ~Bill Eddy

A couple of days ago, I linked an article titled: "Narcissism and the Meltdown" written by Bill Eddy. A reader disagreed with his suggestion to give the narcissist Empathy, Attention and Respect during this economic meltdown. The anonymous reader wrote: "So if only the LA woman had given her partner more *empathy* and *understanding* she, her children, and her mother would be alive today…What a ridiculous case of victim blame." ~ excerpted from The High Conflict Institute.
I am not a sympathizer or apologist for MeFirsters of the narcissistic ilk. However, I agree with Bill Eddy about restraining our behavior and controlling our reactions, especially when the narcissist's self-protective defenses are threatened. Bill Eddy was offering reasonable advice considering "The Situation" (our current financial crisis). It never occurred to me that his words might be interpreted as Victim Blaming, so I'd like to explain my interpretation of E.A.R., though it may not align perfectly with his definitions:

Empathize with the narcissist’s ‘condition’: The emptiness, the fear of being unmasked; the rage of their insignificance; the fear of non-existence. Use your imagination by putting yourself in the narcissist’s shoes and better understanding their ‘condition’. Remember: Empathizing does not mean feeling sorry for narcissists; nor does it mean confusing your feelings with theirs. Empathizing with their condition is a way to make sense of their nonsensical defenses.

Pay Attention to ‘The Situation’. You can listen to narcissists concerns, complaints and worries and most likely, that’s all they want you to do anyway. Don’t ignore, deny or otherwise dismiss precarious circumstances. Be attentive to signs their defenses might be dissembling. If you aren’t paying attention to the narcissist or to the subtle changes in your relationship, you may be missing important signs that could actually save your life.

Respect the Disorder. You don’t have to respect the narcissist as a person but please, respect the pathology of this disorder and its power to distort the narcissist’s perceptions of reality. YOU can quickly become a target for the narcissist’s projected rage if you are deemed to be a threat to their self-image. There is nothing threatened narcissists won't do to protect themselves. You cannot predict their Tipping Point if you do not respect this disorder as being more powerful, more protective, and more seductive than yourself.
I’ll be the first to admit how gratifying it can be watching an arrogant narcissist fall overboard. Most of us wanted to shove their arrogant butts out of the boat ourselves. When we finally have an opportunity to push ‘em over the edge, it’s hard resisting impulses to expose their hubris and pride. But please remember: the continuum from malignant narcissism to 'narcissistic traits' is fairly broad. The fact that it is so broad makes it difficult if not impossible, to determine the degree of pathology. If you are the one making the diagnosis, you’ll probably doubt yourself and give the benefit of your doubt to the narcissist---a mistake that could be deadly.

The truth is that you do not know, nor do I, how pathological someone may be. Perhaps inflicting a narcissistic injury would be satisfying but ask yourself first, “Is it worth dying for?”
If you've read NPD criteria in the DSM-IV, if you’ve learned about psychopathy and sociopaths, then please don't bet your life on how far up or down that continuum the narcissist might be. Even psychologists make grievous errors predicting a narcissist’s potential to harm others. We read about tragedies in the news all the time. A person with narcissistic traits suddenly becomes a murderer as if there were neither rhyme nor reason to their rage. But I think there is: Humiliation. Fear of annihilation, irrational fears based on distorted perceptions.
We know the ‘false self’ the narcissist is protecting is nothing but a confabulation of lies, but the narcissist doesn’t know that. To him or her, that False Self is the only self they know. What you may experience as a ‘humbling’ of your ego defenses, the narcissist experiences as a matter of life and death.

My first priority and hopefully yours is the same: Staying Alive. Breathing. Living one more day to make good friends, to share our lives, to keep on blogging about narcissists.

Understand the narcissistic disorder. Learn everything you can to protect yourself from ignorance. Pathological narcissism is a serious disorder that should never be dismissed as benign.
You can’t know for sure.


Maybe it all depends on The Situation.