Rescue your Self from the DRAMA

"Almost 40 years ago, therapist Stephen B. Karpman identified a pattern of interactions in alcoholic-codependent families, which he named the "Drama Triangle". The pattern involves two people, most of the time, but any number can play.

"There are three roles in the Drama: Victim, Rescuer, and Persecutor. You can draw a triangle, and write Victim at one point, Rescuer at the next, and Persecutor at the third. The triangle works like this: people move between these roles, and go around and around and around the points of the triangle in a neverending drama of rescuing, persecution, and victimization.” ~Stormchild on Gale Warnings

When the police were called about two suspicious-looking teenagers roaming a church parking lot, they arrested both of them on the spot and telephoned worried parents. Since my sisters and I were scoping out neighborhoods looking for vagabonds-without-coats, we immediately switched directions and headed to the location where the boys were being detained. The minute my younger sister saw both boys kneeling on the ground, she broke down sobbing at the wheel.

“I can’t do this! I can’t bear this!" Her vehicle slowed to a near stop in busy afternoon traffic. I was sitting in the back seat and recognized her panic. Been there done that myself. She was having a Xanax moment but without the Xanax. She’d never experienced nor anticipated experiencing anything quite like this in her incredibly bless-ed and blissfully charm-ed life.

Using my big-sister bossy voice, I shouted, “Pull over the car! Do it NOW, dammit!"

Loud voice + swearing = results. She navigated the car into the driveway and parked directly in front of two police cars. An embarrassingly lousy parking job, too, I might add.

We had reported my nephew missing the first afternoon he didn't return from school. We authorized police to arrest him as a runaway. Yes, we had the option for them to return my nephew without handcuffs or spending a night in detention; but we decided a Reality Check was in his best interests.

"Hey, kiddo, this is life in juvenile detention. It ain’t all its cracked up to be on TV or movies, is it? Where’s Will Smith when you need him, huh? Oh, that’s right. He’s sleeping in public restrooms on his way to be a stockbroker.” (see ref)

Well maybe they don’t arrest movie stars for sleeping in train stations, but they sure do bourgeois boys with ipods.

No, it wasn't easy. Yes, we were sympathetic. Yes, we understood his impulsivity. Did we feel the urge to step out of our vehicle, sooth him with comforting arms, tell the police to release him into our custody, take him home and fix warm soup with freshly baked muffins after letting him soak in a bubble bath?

Rescuing him was our automatic reaction...an instinctual response to our role as parents. We didn't do that, however. We didn't rush to his side and wipe his tears even though he was weeping buckets at that point. He was terrified, ashamed, begging someone to save him. Anyone. And no doubt his kneecaps were killing him too, after genuflecting on the cold ground praying his faithful family would make his problem disappear.

We did not talk to him. We did not wipe his tears or tell him, "everything will be okay 'cuz we love you so much." We spoke directly with the police instead.

Officer-handsome-as-the-devil asked, "Do you want us to release him into your custody, or would you like us to take him to juvie?"

"What’s the penalty for running away from home?"

“Juveniles spend a night in the Christmas Box ‘til their parents pick ‘em up.”

The police had already removed his friend's handcuffs before our arrival. After listening to our conversation though, the other kid’s father asked, "May I call my wife?" In about two minutes or less, he returned and said, "We have decided to let our son deal with the law, too. Sorry, son. We love you, but this is best." Then he watched as police relocked the handcuffs on his son’s bony wrists, ushered him to their black-and-white, then protected his head while he climbed in the back seat. Well, watching a cop protect criminals’ skulls from the car frame was exactly like Reality TV---so at least the kid knew enough to duck his head.

Some people have questioned our decision to step aside. They can’t quite fathom why we didn’t intervene. We’ve even been asked if we had turnips for hearts. How could parents be so harsh when a child was clearly in distress?

I have an answer for that:

We knew our limits. We admitted this situation was way beyond our expertise. So far beyond our typical and norm, we didn’t have a clue about appropriate action. We called his psychologist for help the first night he went missing, and then, we faithfully followed her instructions.

She told us to back off. Meaning: don’t become a buffer zone between the child and the police. What she was really telling us without a PDF handout was this:
Parent the kid. Get your boundaries up. Stay out of the drama triangle. 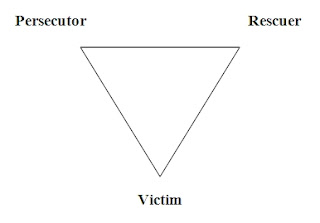 If you think about her wise counsel, you’ll realize that rescuing him would have defeated his opportunity to hold himself accountable. We’d unwittingly reinforce perceptions that he was a victim. Claiming a stake in the victim position is a troubled teen’s favorite hangout, since victims don’t have to grow up. Maybe not ever if guilty parents perpetuate excuses for budding teenage narcissists.


And the police? The true rescuers? Well, they would have shifted to the third position as Persecutors when Rescuing moms and Victimized teenagers bonded together to avoid accountability.
The psychologist laid it all out and we trusted her advice since she’s worked with troubled teens for twenty years. She told us very few parents followed through because it’s so emotionally distressing, even when the best chance a child has to change the course of their lives is the first time they break the law. In her experience, parents should make the first experience the worst experience, ensuring our kids are as miserable as possible. Pain may be the best deterrent to future criminal behavior. If it hurts real bad the first time, he’ll think twice before upping the ante. Far better that he suffer in juvie than prison.
“Let him own this himself”, she said. “Don’t take responsibility for the mess he created. Did he ask you before leaving? Did he talk to you about the thoughts he was having? You have ears, right? Did he try to communicate with you? Or did he arbitrarily decide life on the streets was better than homework, chores and family rules? If he’s old enough to make a life decision that profound, he’s old enough to handle legal consequences.”
She’s right, you know. Families have rules but society has laws.
This is very important advice for parents whose marshmallow hearts deter them from setting boundaries or establishing expectations from family members. Living in a home with a family is a Privilege. If we’re fearful setting boundaries will alienate a troubled teen, we need to remember they’re choosing to alienate themselves. If we’re fearful our withdrawal will trigger their fear of rejection, we need to pay attention to the fact that they just ripped our hearts out by running away. If that’s not rejection at its finest, I don’t know what is!
Own your own pain and don’t assume the kid is suffering more than you are. He’s not.
I remember thinking “He needs to know we love him.” And then I realized something. Giving MORE love and reassurance after breaking the law would be rewarding him for hurting his family and society. The time to reassure him of our love would be after he respected his privilege to be in our family and in our society. So even though we wept all weekend, he didn’t see us cry. That’s because he was locked up in juvie until the courts released him the following Tuesday.
Note to the Wise: If yer gonna run away, don’t do it on a Friday when judges go home for the week-end. You’ll sit your fanny in a concrete room and ain’t nobody gonna get you out for Sunday brunch and Quiddler.
One more thing? We did not see him during juvie’s visiting hours; we did not spend our time baking cookies to take to juvie; we did not call him on the telephone. By Monday morning, he called us, his voice quivering on the phone. “Will you pick me up tomorrow when they let me go? Please?”
We thought about telling him to get a taxi but decided that was going a little too far.
Next up: What we did over the week-end instead of spending time in juvie with all those other parents reassuring their juvenile delinquents AND their parental egos.

Sony Pictures, The Pursuit of Happyness

What a Glorious Holiday Season!