A new category on my blog: Need-To-Knows 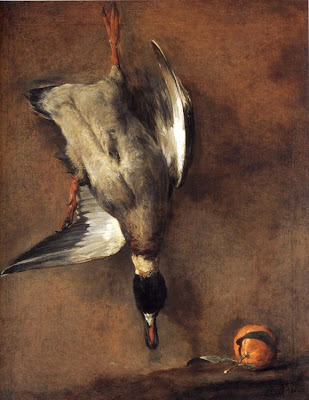 A green-neck duck with a seville orange, Jean-Baptiste-Siméon Chardin

I would like to create a category on my blog, geared towards a basic understanding of pathological narcissism. A new link for Need-To-Knows will be located on the right side of my blog and hopefully, some of my articles will capture the basics of a disorder most people have never heard of: malignant narcissism.

If people have heard of 'narcissism', they assume narcissists are vain---self-worshipers spending far too much time in front of a mirror; that anyone in the public eye or a leadership role is a narcissist; and that narcissism is benign self-centeredness---annoying at worst and laughable at best. In fact, it astonishes me how frequently people boast about being narcissists. Some people seem to believe that narcissism means they are self-confident and assertive. That being a narcissist is worthy goal. It's cool!

Narcissism is a psychological disorder that is being minimized by pop-culture and even while the term is becoming more common in daily parlance, it is also becoming 'meaningless.' A Fluff word. A Puff word. A word disguising the significant damage narcissists do to other people. Here's a short list of how Not Cool narcissists are:

Narcissists have a distorted self-image. Narcissists are incapable of emotional maturation, caring for others in a safe and trustworthy bond of love, and they lack the capacity to cope with life's stresses without blaming others. They do not forgive, do not trust, do not grow old gracefully. There is nothing funny or praiseworthy about being a narcissist. Anyone with personal experience dealing with a narcissist, would be loath to consider 'narcissism' to be nothing more than benign hubris.

Note To The Wise

Unless we understand the detrimental impact narcissistic relationships have on our spiritual and emotional well-being, we'll be like green-necked sitting ducks for those Machiavellian narcissists in camouflage.

The fact is: You cannot change the narcissist or cure him-or-her with your love. You will change. The narcissist won't.

What we can do is learn about pathological narcissism and become familiar with our reactions to people with narcissistic traits and/or a personality disorder.

If you do not want to be a lame duck, the only way to avoid being target practice for duck-hunters, is to educate yourself about pathological narcissism.