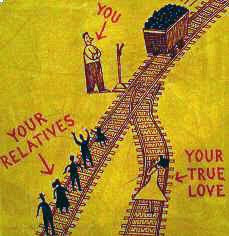 "The gap between people’s convictions and their justifications is also on display in the favorite new sandbox for moral psychologists, a thought experiment devised by the philosophers Philippa Foot and Judith Jarvis Thomson called the Trolley Problem. On your morning walk, you see a trolley car hurtling down the track, the conductor slumped over the controls. In the path of the trolley are five men working on the track, oblivious to the danger. You are standing at a fork in the track and can pull a lever that will divert the trolley onto a spur, saving the five men. Unfortunately, the trolley would then run over a single worker who is laboring on the spur. Is it permissible to throw the switch, killing one man to save five? Almost everyone says “yes.”

Consider now a different scene. You are on a bridge overlooking the tracks and have spotted the runaway trolley bearing down on the five workers. Now the only way to stop the trolley is to throw a heavy object in its path. And the only heavy object within reach is a fat man standing next to you. Should you throw the man off the bridge? Both dilemmas present you with the option of sacrificing one life to save five, and so, by the utilitarian standard of what would result in the greatest good for the greatest number, the two dilemmas are morally equivalent. But most people don’t see it that way: though they would pull the switch in the first dilemma, they would not heave the fat man in the second. When pressed for a reason, they can’t come up with anything coherent, though moral philosophers haven’t had an easy time coming up with a relevant difference, either.

"When psychologists say “most people” they usually mean “most of the two dozen sophomores who filled out a questionnaire for beer money.” But in this case it means most of the 200,000 people from a hundred countries who shared their intuitions on a Web-based experiment conducted by the psychologists Fiery Cushman and Liane Young and the biologist Marc Hauser. A difference between the acceptability of switch-pulling and man-heaving, and an inability to justify the choice, was found in respondents from Europe, Asia and North and South America; among men and women, blacks and whites, teenagers and octogenarians, Hindus, Muslims, Buddhists, Christians, Jews and atheists; people with elementary-school educations and people with Ph.D.’s."~excerpt by Steven Pinker from his article The Moral Instinct published by the New York Times.
* * *

Stanford Encyclopedia of Philosophy:
The Definition of Morality

"Following Aristotle, “ethics” is sometimes taken as referring to a more general guide to behavior that an individual adopts as his own guide to life, as long as it is a guide that one views as a proper guide for others. When a general guide to behavior that endorses self-interest as primary is put forward for all to follow because acting in one's self interest is taken as fostering the interests of all, then ethical egoism can be taken as a moral theory. However, the current philosophical practice is to take ethical egoism as a view that promotes acting in one's own self-interest even when this requires harming innocent people. In this sense, ethical egoism is a moral guide only in a purely technical philosophical sense. No non-philosopher would regard a guide to conduct that takes one's own self-interest as sanctioning harming innocent others as a moral guide, because no one would want anyone else, let along everyone else, to adopt this guide. Sidgwick, (Methods of Ethics) who regarded rational rules of conduct as moral rules, may have been the primary source of the current philosophical practice that includes “ethical egoism” as an ethical theory.

"In any normal sense of “morality,” morality cannot be a guide to behavior that a person does not want others to adopt. However, there is a sense of “morality” such that it does refer to a code of conduct adopted by an individual for his own use, but which he does not require to be adopted by anyone else. This can occur when an individual adopts for himself a very demanding guide that he thinks may be too difficult for most to follow. However, this guide is correctly referred to as a morality only when the individual would be willing for others to adopt that code of conduct, but does not require that they do so, and so does not judge them to be immoral if they do not adopt it...

"...Referring terms are ambiguous when the referents of a term differ from each other in sufficiently important ways. The original descriptive definition of “morality” refers to an actual code of conduct put forward by a society and accepted by the members of that society. When the examination of large diverse societies raised problems for this original descriptive definition, different descriptive definitions were offered in which “morality” refers to a code of conduct put forward by any group, or even by any individual. Apart from containing some prohibitions on harming some others, different moralities can differ from each other quite extensively. Unlike the descriptive definitions of morality discussed earlier, which may have minimal implications for how a person should behave, the proposed normative definition of “morality” provides an explicit guide for how a person should behave. The proposed normative definition of “morality” is controversial but it does have some features that should be widely accepted. The definition allows as meaningful the commonly asked question, “Why should I be moral?” It is also compatible with the commonly held view that it is not always irrational to be immoral, however it guarantees that it is never irrational to be moral. This definition also explains why we want others to act morally and why others want us to act morally. It thus does what definitions of referring terms are supposed to do: it clarifies this term's relationship to other terms with which it is related, and helps to explain why we use the word in the way that we do." ~Excerpted from Stanford Encyclopedia of Philosophy

* * *
A three-part edited version of a video speech by
Dr. Marc D. Hauser

Marc D. Hauser is an evolutionary biologist who teaches at the Psychology Department at Harvard University.

This is the first part of an edited lecture by Marc Hauser. It moves from various philosophical theories of morality to social science research into moral dilemmas, leading up to the Trolley Problem.

In this part, Dr. Marc Hauser discusses the impact of religious belief on moral decision-making.

And last but not least, a video speech by
Steven Pinker


"Renowned linguist Steven Pinker speaks at Google's Mountain View, CA, headquarters about his book "The Stuff of Thought." This event took place on September 24, 2007, as part of the Authors@Google series."


Please pay careful attention to Google's Warning: This video contains Adult Language and Content. If you cannot tolerate the 'F-word', please do NOT watch this video. If you can, well, this is a deeply interesting discussion about our use of language and euphemisms.

Resources
The Moral Instinct by by Steven Pinker, published in The New York Times

The Doctrine of Double Effect, Stanford Encyclopedia of Philosophy

The Trolley Problem on Wikipedia