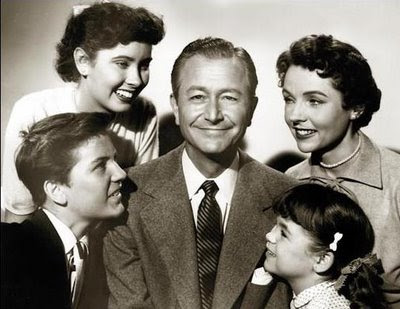 “Father Knows Best" was a popular television series beginning in 1954 and ending in 1963. Did you love this six Emmy award winning series as much as I did?

"Despite the show's title, Jim Anderson wasn't really like a "Father" - he was more like a "Dad", and the TV audience connected. He was a responsible parent who loved his wife and kids. He was a man who would do a paper route in the rain for his sick son, Bud. He was a man who'd always choose to see Kathy in a school program rather than attend an important Chamber of Commerce dinner. His family came first, but it was a delicate balancing act." ~excerpted from the official website for "Father Knows Best"

Everything I learned about being a good wife and mother can be traced back to "Father knows best". Just kiddin'...but only slightly. Have you watched reruns of your favorite TV shows and then forgiven yourself for being excessively malleable, suggestible, impressionable, and naively idealistic because you were six years old and the perfect black-and-white family on television made your own family pale in comparison? I'm not talking paling in comparison as in Shades of Gray rather than black-and-white. I'm talking shades of gray as in blurry and undistinguished.

"The “Father knows best” ideology is usually associated with a pre-feminist, presumably passé 1950s conceptualization of idyllic domestic order that was popularized and concretized by the television program of the same name. In that situation comedy, the title was often ironic, given that its episodes regularly served to point out that Father did not, in fact, know best but often learned that Mother had been right all along. Yet lip service to a “Father knows best” ideology was often maintained on the surface, because Mother would modestly defer to or indulge Father’s ego.”~Elinor Ochs and Carolyn Taylor

During a 'healing process', it’s useful to examine our parents and our social programming. After scrutinizing the debris under every rock in my family-of-origin's gravel pit, curiosity led to examining media's influence on idealized notions of family---the ways in which impressionable kids are programmed to do their gender well in the pursuit of familial happiness. Media influences such as television, radio, movies, music, books, magazines, and now the Internet, influence our perceptions in ways that may not be evident until we dredge up internalized assumptions, schemas, and unquestioned beliefs. For most of us, that requires a crisis of some kind.

Sure, it’s ludicrous to blame "Father Knows Best" for the dysfunction in my family-of-creation. I still maintain that media had an influence---a powerful influence on this girl’s Utopian ideals. You see, my father worked constantly. In wintertime when the soil was resting, he wasn't. An absent father fueled an active imagination about what a father and husband would be like if they were engaged in Mom and the kids' daily activities. If the father in your childhood is a weaker character than Jim Anderson, you may be prone towards idealizing family to meet your emotional needs from childhood. That's just a guess coming to mind while viewing television shows I watched as a child.

As an adult, the gender socialization in “Father Knows Best” is so blatant it makes me wanna burn my favorite apron; but as a child, television’s scripted roles fueled yearnings for paternalistic validation and engaged interaction: the sweet bliss of family as a safe place for a kid to grow up.

Elinor Ochs and Carolyn Taylor studied gender dynamics around the household's dinner table and crimenantlies! Did their description of the mother deferring to the 'family judge' ever align with my behavior. OUCH. The authors of this research article write:


“…women directed their narratives to their husbands (or when children directed their narratives, voluntarily or not, to their fathers), they disadvantaged themselves by exposing their experiences to male scrutiny and standards of judgment. They performed actions as narrators that rendered them vulnerable to repeated spousal/paternal criticism of them, especially as protagonists. Through such means and with such efforts, “Father knows best”---a gender ideology with a deeply rooted politics of asymmetry that has been contested in recent years---is still in reverberating evidence at the two-parent family dinner table, jointly constituted and re-created each interactional moment through everyday narrative practices….we hope to have raised awareness of the degree to which some women as wives and mothers may wittingly or unwittingly contribute to—and even set up---the daily reconstruction of a “Father knows best” ideological dynamic."

Take this short video of the Anderson family's Thanksgiving, for example. Who wouldn't try everything they could to create a family like that?

“Hey, son," Mother's chipper voice breaks the dead silence around the dinner table. "Why don’t you tell your Dad about your English essay?”

“Oh yea! I got a B+ and the teacher asked me read it out loud to the whole class!”

Dad looks up from his pork chop, “You only got a B+? Pass the potatoes. Why didn’t you get an A? Pass the gravy. Did you stutter or something?”

“Daughter,” Mother rushes to the rescue, “Why don’t you tell your Dad about your French test?”

Dad saves his daughter from Mother's persistence (thus rescuing himself from feigning interest), “Don’t make her talk if she doesn’t want to! Why are you always controlling the conversation?”

Then he growls, "What's for dessert? Or didn't you have time in your oh-so-busy day to buy ice cream or did you forget? You seem to be forgetting a lot lately. Having your monthly?"

The familial interaction we witness in half-hour sitcoms influences the way people perceive gender-divided roles within a family construct. We don't memorize scripts consciously, but we emulate behavior modeled in actors’ roles. Since every episode had a happy ending resolving misunderstandings and conflict, we might believe that following a script will resolve our dramas, too. Speaking for myself, of course.

The good thing about television shows like "Father Knows Best" or even "Leave it to Beaver" is the lasting impression on children's’ minds that families are supposed to be safe places to grow up; that family is where we are accepted, socialized, and unconditionally loved. Even if your own family pales in comparison, there’s an ideal to strive for. A little empathy for your kids, a lot of forgiveness for your spouse, throw in some resiliency with lots of hope and you may come close to achieving childhood wishes.

If, despite your commitment and your partner's lack thereof (equal commitment, that is) everything goes to hell in a hand-basket, you won't regret having tried to hold that basket together for as long as you could.

I think people need ideals of healthy families rather than trendy sitcoms like The Simpsons suggesting stupidity is funny, kids are smarter than parents, Dads are idiots, and Moms with blue hair lack authority. Shows like The Simpsons may be entertaining but if you watch that show with a critical eye about the messages kids are internalizing, you just might want them watching a perfect Jim and perfect Margaret Anderson instead.

An ideal gives us something to work for rather than giving up on family as an impossible and unrealistic illusion. We'll never be able to live up to an idealized version of the safest family in the universe, but at least we can say, "We're trying."