A strange, very weird joke: King of the Frogs 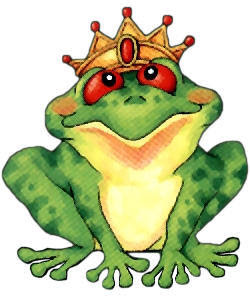 King of the Frogs

There once was a frog king, who was ruler over thousands of frogs and believe it or not, they all lived together in a huge grass hut! Now this king's minions loved him dearly and were willing to do anything for him he wanted. Which means, of course, he had no need to the Bad Guy enforcing slavery & earnest adulation.

Subordination was willingly offered and graciously accepted by the king as how things were always meant to be in the benevolent land of the frogs. But this particular king was obsessed with collecting thrones. He had thousands of thrones stored in the attic of the huge grass hut.

Every time he got a new throne he liked better than the one he was sitting on, he stored his former beloved throne in the attic, right alongside the rest of his collection.

At the time this story took place, he was sitting on a large, ornately decorated golden throne. This throne was heavy and cold and hard for him to sit on whilst ruling his kingdom; so the king secretly hoped for a new replacement. Lucky for him, his best friend in a neighboring kingdom croaked, leaving the throne to him in his will.

After waiting an appropriate mourning period, the king sent his runners to pick up his inheritance. They soon returned with a beautifully carved, jewel encrusted teakwood throne which also had a padded leather seat cushion.

He immediately fell in love with his new throne and soon his people were moving the old heavy throne up to the attic with the rest of the king's collection.

Well, this was a huge undertaking requiring hundreds of his people to push and pull the gold throne up a long flight of stairs to the attic of their grass hut.

As soon as they reached the top of the stairs the additional weight of the gold throne was simply too much for the grass hut to bear. It collapsed...killing the king of the Frogs and all his people.


Moral of this story?

p.s. I'm not sure where I found this joke on the web. If anyone has a link, please let me know. Thanks!