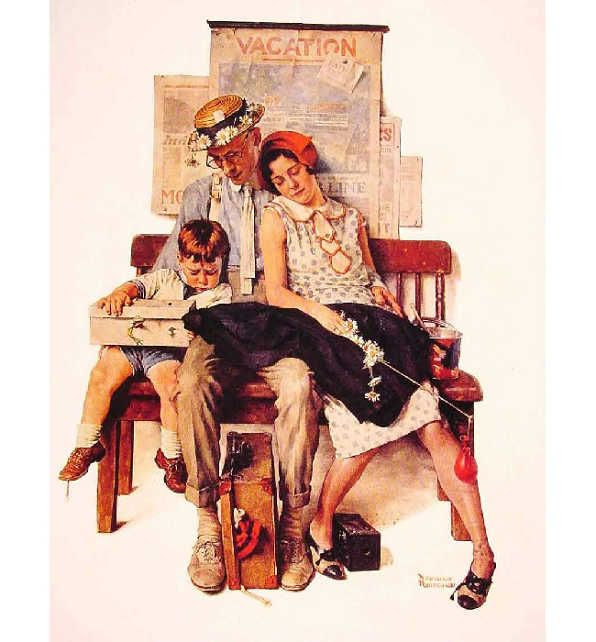 I've been searching for an image that captured the essence of Christmas 2011. This one appealed to me, except we didn't go on vacation and I don't have a toddler, nor a husband, and the exhausted woman is w-a-y younger than myself. Last but not least, my toes point outward like a duck, not a pigeon. Which isn't an attractive sight for anyone other than ducks and you know what they say about ducks, right? You do not want to be attracting those folks.


Normal Rockwell paintings always come to mind when waxing philosophic about family and Christmas. Oh, you cannot believe how I can go on & on & on about the meaning and purpose, the values and principles of family. Then reality clashes with idealism and the image in my head is forced to adjust. SO, in the interests of personal integrity and sanity, Christmas 2011 would be better represented with this picture---->

Christmas 2011 was a dramatic Christmas as it generally is when my family-of-origin gets together. If you can bear thinking about this frightening fact, all my siblings are in their fifties (YIKES) and I am the only one who freely and without court order, sought professional therapy when John Bradshaw warned PBS audiences back in the eighties, that every family was dysfunctional. It was only a matter of degree. My family, lest you underestimate our competence, has a masters degree in dysfunction.
As the tension began to build and knuckles turned increasingly white, I danced around the kitchen making panettone, macaroni, potato rolls and pumpkin pie. Roasted turkey, glazed ham, prime rib and cheesy  gratin dauphinois. Pound cake, apple pie, poultry stuffing with spicy sausages and sage. Sweet potatoes, mashed potatoes, pecan potato pie. My finale? Perfectly crafted homemade caramels wrapped in waxed paper. Then I set a crystal bowl of Antacids on the counter next to the Prozac and you can guess which bowl was empty after ten days in Hell's Kitchen. Not the Prozac. SO, in the interests of personal integrity and my sanity, Christmas 2011 would be best represented with this picture. Look left but do not post comments about stress and belly fat, nor links to crash diets or even healthy ones. Thanks in advance. Much appreciated. Some folks use drugs to get through holidays. Some folks drink, others exercise to escape family. Me? I like to share my coping methods in the spirit of community. "Sit here. Take some bread. Have some pie. Eat. Feast on your life." We won't feel better in the morning but at least we can blame acid reflux and grab the Rolaids for a quick fix.

With family-of-origin issues, there are no quick fixes. Try talking candidly with your fifty-sumthing-old siblings and you'd rather they'd eat themselves into oblivion and sedate their 'siblingus rivalus' with sugar. We don't live in Philidelphia, we four girls with conflicting personalities and varying degrees of maturity. I am constantly shocked at my sisters' immaturity. Their regressive blindness. Their six-year-old jealousies and petty competitive superiority. I was so distraught by their childishness that at one point, I grabbed my bag of caramels and went home. Well, that was kinda hard since I was home already. SO,  in the interests of personal integrity and sanity , I imagined the kitchen to be a castle and denied entry to my big-footed sisters. Which worked fine for them of course, because it meant I served the meals and did the dishes and mopped the floors while they played games with their fellow retrogrades, polished their nails, and shined their jewels. I was hoping to fatten them up just prior to shoving them in the oven, knowing never the wiser would they be (nobody ever suspects the maid, do they?) and then my conscience wouldn't let me go through with it. Besides, 'cheesy sisters dauphinois' would require gigantic roasting pans the likes of which only exist in fairytales.

There is nothing particularly interesting about my dysfunctional family. We're like most dysfunctional families---better than some, worse than others, comparatively speaking. I think what is interesting is Awareness. Consciousness. Introspection. Empathy. Imagination. Hope. Healing. Dancing between what was, what is, what could be.

What's even more amazing than all of the above?