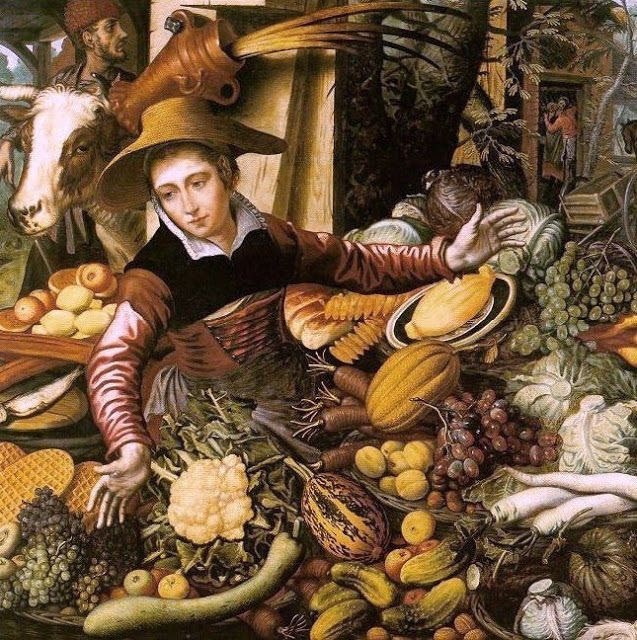 Two weeks ago we traveled to my father's garden to pick vegetables. He's a retired farmer at eighty-eight, still growing a hundred tomato plants as tall as a hired hand's shoulders. If you can't imagine three-hundred pounds of vegetables lying about the kitchen, this picture'll give you a good idea. Except for the cow and the man in the background. We didn't steal Dad's cow because he doesn't have one and no bearded man's been hovering in the shadows of my kitchen for over a decade thank God pass the tomatoes on the china platter we use for every day.

Not that I don't like men because I do. I may like them too much which is why it's rectifying learning to live without one. When you grow up in a patriarchal religion, existing without a man is deemed peculiar if not blasphemous and neighbors want to know why you're single. Unless you're ugly. Then they figure you didn't have a choice about spinsterhood and say stuff like, "Oh, that CZ. She'd be such a great wife for an old man if it weren't for...her...face." Some people prefer believing men have rejected me rather than knowing I made the decision to stay single based on reasoned principles and predictable outcomes, having nothing to do with divorce bitterness or male disdain. I carry no torch for my ex, you can rest assured on that account; but I do carry matches in the event he shows up in a gas truck. That was a smart alec thing to say, wasn't it? The truth is: violence is not my thing. Which is why remaining single allows me to live by my principles. Jest kiddin'. Not all men are violent. Just the ones I pick.

My family is much better off if I'm picking vegetables, not husbands.

My sister who lives with me hates preserving food. She won't do it. She's such a lousy picker of men that everyone agrees she's better off in an executive suite than an apron. She compares the price of case-goods to home canning and if she calculates her time based on whatever-ungodly-sum-per-hour she earns in the workplace, she can't justify indentured kitchen servitude. In 2014 it makes no sense does it, if the value of a thing like canning is measured in dollars and cents. Even if my labor smacks of gender oppression and yesteryear quaintness, there's satisfaction in knowing my foremothers were similarly obliged. Canning lets me walk in their shoes, linking arms with my ancestors as we chop, simmer and sterilize our way to spiritual harmony. Canning gives placement to my life, affirming my connection to the past and participation in the future. We are here because we eat and my kids will survive because I fed them and this is an inarguable fact. What could be more honorable than sustaining life? I think about these things while ladling garlic-infused sauce in glass jars, enough for a year of Friday night pizzas.

The question to ponder during a sweaty-browed week was why canning would be ultimately satisfying. Why bottle tomatoes when a jarful costs less than a dollar? I DON'T KNOW. Maybe because it makes me happy which is obvious to everyone in the house since I break into song unexpectedly. Usually hymns. This confuses the hell out of my family. No worries, they're used to cognitive dissonance. They also know after living with me that I believe hard work results in long-lasting satisfaction and eternal rewards. "When we immerse ourselves in domestic work," I tell them, "we lose ourselves in something greater than ourselves." Canning is not a repetition compulsion.


Values tell you what your heart believes is important

We preserve food in my family because it's the right thing to do. "Hard Work Builds Character," my grandmother would pronounce, lacking tolerance for complaints; she was a hardy woman. At this stage of my life I know she's right but would ask if she were here, "What kind of character, grandmother? Joyful and satisfied; or resentful and ornery?"

I married a narcissistic husband for whom the ordinary tasks of marriage and family carried little meaning or value, although he performed them as dutifully as a good man should. "It's time for you," he said one day after I'd painted the second-story rain gutters, "to get off my gravy train!" And so I did and discovered true joy when people knew in their hearts that I didn't can tomatoes because I had to; I did it because I loved them.

I did not know satisfaction and joy weren't guaranteed outcomes of hard work and by hard I mean taken for granted. I've learned through my narcissistic relationships of which there have been more than one, that there is no life-sustaining work that cannot be sufficiently criticized and marginalized to the point of worthlessness and invisibility. Yes, my ex worked hard at his career and yes, he worked hard maintaining our home, but he didn't see how hard I was working, too. Maybe because I was singing. 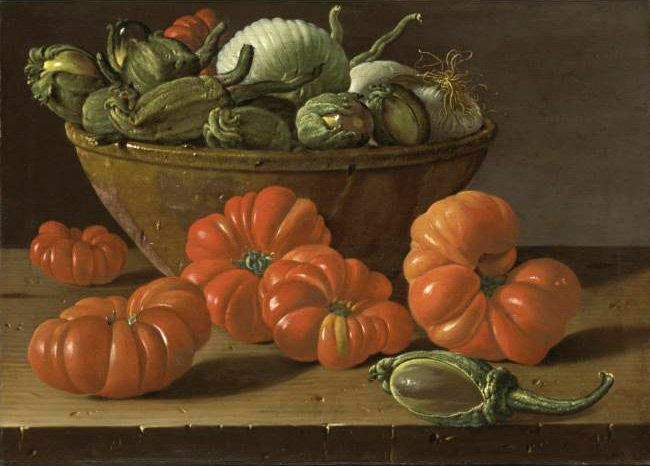 People who find no joy in quotidian work, may still complete the tasks their culture expects of them. They excel at performing their family values. Fueled by stoicism, they move around the kitchen like automatons, grumbling when they trip on the gel mat, cramming jars instead of cradling them, scrubbing tomatoes instead of bathing them, counting their hours to coerce gratitude. When canning week ends, they deftly check the box on their task list: Done. The family breathes a sigh of relief.

Narcissistic characters don't do the task for the sake of doing it. It's a job. They did it. Their earned their right to live another day. They measure the value of their existence by keeping score with the competition. "You put up one hundred jars of Mexican Salsa?" your cousin exclaims. "That's fantastic! You're amazing! I put up one hundred and fifty!"


Tip: If your relative is narcissistic and you want to stay on good relations with her, always ask how many jars of tomatoes she canned first. Make sure your number count is fewer. White lies are permissible for the sake of family unity. And if you want to show off your beautifully canned peaches turned ever-so-perfectly in the jar, expect to be told how much time you wasted doing something nobody in their right mind would ever do. And then expect to see her perfectly turned peaches next year that didn't take her nearly as long as it took you---would you like a few tips 'cuz she's willing to share.

The grueling and often-invisible work of raising a family and supporting a husband led to a contented midlife without regrets. I had fully invested myself in the "greater good of family" without immediate reward. There were no promotions to be seduced by, no public acclaim to distract me. Doing for others and contributing my time, cultivated a deep attachment to family, along with personal satisfaction, something I'd learned as the eldest child. My ex, on the other hand, insisted he'd worked his whole goddamn life dammit and deserved to retire with someone he liked a lot more than his family. Why had my hard work created contentment, not resentment? Why didn't I view family as a burden or hate them for being ingrates? This occupied my mind while boiling jalapeno peppers on Jelly Day, nearly choking to death on the toxic fumes but oh, is jalapeno jelly good at Christmastime! Our ultimate satisfaction merging work with passion sustains the body and nourishes spirit, too. I never complain (not for long anyway) about the hours spent, bruised feet, burn blisters, the fruit flies and scorched pot bottoms because the canning process makes me happy. Carrying forth the family tradition makes sense of my life, gives meaning to my life, and secures my place in history. I really think I could find meaning in a haystack; be happy living in a shoe. The thought of canning tomatoes in a shoe tickled me on Bruschetta Day. Blessed be the woman finding happiness in her pantry.

On Spaghetti Sauce Day, the FedEx man rang my doorbell. I wiped my hands on my apron (good cooks are a mess to look at, a joy to share the table with) and answered the door. He sniffed the air and smiled, "Spaghetti sauce?"

His eyes softened and he smiled, "My mom canned tomatoes! She passed away last year and I miss her so much." I listened to a few stories about his mother and went back to my kitchen. My daughter wandered up the stairs and hugged me. "Do you know how happy it makes me when you're canning, Mom? I love you so much."

I carefully fill the jars just so, making them aesthetically pleasing and not because they're headed for the State Fair, but because it satisfies me when ordinary things are done excellently. That I imagine my great-great-grandmothers nodding their approval might not be something to share with just anyone, though.

Love to all,
CZ