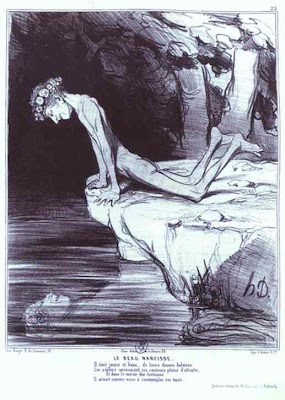 Today I am posting an 'oldie but goodie' from back in 2003 when Personality Disorders made Time Magazine's headlines. Only the first portion of the essay is on my post, so you can retrieve the rest of this article by clicking the link.

"Nobody totally changes," says Josephs. "But anyone can become more flexible and resilient. Anyone can make progress."

I remember reading Kluger's essay and wishfully thinking his comment might apply to my situation. Yea, it's true. When we're drowning in tears of despair, we'll grab anything we can find to keep our desperate hope alive. The key thing to imprint on our minds and hearts is that no matter how much we love another person, we cannot change anyone---only ourselves. And change for anyone, even ourselves, is grounded in the willingness to change.

Unless a narcissistic person seeks professional help from qualified therapists, there's not much anyone can do but Let Them Go. Why won't narcissists ask for help when they are obviously self-destructive? As the article states below:


"Personality disorders are ego syntonic: individuals believe that the drama, self-absorption and other traits that characterize their condition are reasonable responses to the way the world is treating them."

Masters of Denial
by Jeffrey Kluger, 2003

It has got so psychologist Lawrence Josephs can tell right away which patients are likely to fire him. The narcissists may be the worst. These are the ones who are there in the first place only because their spouse would not quit hectoring them to show more interest in the marriage, and the people at work just didn't seem to give them the credit or attention they deserve. Often, they stay only long enough to decide that what they really need is to leave the marriage and quit the job. After that, they sack the shrink.

"They come in under duress," says Josephs, a psychology professor at Adelphi University in Garden City, N.Y. "But they don't commit. What they really want is to have everything on their own terms."

If it's any comfort to Josephs, he's not alone in having such trouble managing narcissists--and it's not just the narcissists giving therapists such problems. Narcissism is one of 10 conditions under the diagnostic heading of personality disorders (PD), and by most accounts, narcissists are among psychology's toughest nuts to crack. Talk therapy often doesn't touch them; drug therapy may do just as little. Researchers know why.

Common mental conditions, such as anxiety disorders, eating disorders and depression, can be thought of as a pathological rind wrapped around an intact core. Peel the skin away through talk therapy or melt it away with drugs, and the problem may abate. Personality disorders, by contrast, are marbleized through the entire temperament. Narcissists may be self-absorbed, but they believe they jolly well have a right to be. Histrionic personalities may make too much of things, but how else can they be heard? It's hard enough to persuade most people to see a therapist--harder still when the patient denies there's a problem at all. "People rarely come in with a self-diagnosed personality disorder," says Josephs. "Friends and family push them into it."

These days they have more reason than ever to push. As families increasingly fragment and as societal pressures grow, experts say they are seeing more cases of personality disorder than ever. As much as 9% of the population is thought to suffer from some kind of personality disorder, and as many as 20% of all mental-health hospitalizations may be the result of such conditions. Epidemiologists have not done a very good job of comparing these figures with those of earlier years, but many doctors report--anecdotally--that their PD caseload is indeed on the rise. "The more severe ones are increasing," says Josephs, "especially among people who grew up in homes with divorce or drug and alcohol problems."

As this happens, more and more researchers are looking for new ways to treat the conditions--exploring both genetic and environmental roots, seeking both therapeutic and chemical cures. And well they might. "The social costs of personality disorders are huge," says Dr. John Gunderson, director of the Personality Disorders Service at McLean Hospital in Belmont, Mass. "These people are involved in so many of society's ills--divorce, child abuse, violence. The problem is tremendous.

While solutions are elusive, the pathological arc of PDs is predictable. They tend to show up after age 18, striking men and women equally--though gender may influence which of the 10 disorders a person develops. The disorders are grouped into three subcategories, and of these, the so-called dramatic cluster--borderline, antisocial, narcissistic and histrionic disorders--is the best known. But it's the borderlines who cause doctors--to say nothing of families--the most headaches..."

Click this link for the conclusion of the article:
Masters of Denial