The Debate: Gender and Science 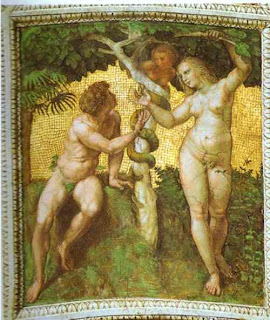 Adam and Eve by Raphael, 1509
I'm ever-ready for a healthy debate about Gender, even a debate that's high-falutin' and high-brow and so far over my head I need stilts to read the transcript. That's fine with me. I have a dictionary and I'm tall like my grandma.
Down here on ground zero, people are always debating sex differences, though it's usually when Mom wants help washing dishes or Dad needs to plow the field. Who gets asked to help? The son or the daughter? How come boys are asked to drive tractors since insurance statistics prove girls are safer drivers. Besides, I never met a burnt saucepan yet that couldn't use some elbow grease fueled by hefty testosterone.
Even in my mid-fifties, the male versus female debate continues to rage. I've been thinking about gender ever since wondering why I had to wear a skirt in the wintertime when boys were safely bundled in Levis. The answer grown-ups gave me? Just 'Cuz. But even daring to think about 'why' set the stage for asking 'why'---which led to lectures about doing femininity well or getting myself in trouble with the gender police. Not that parents and leaders realized they were reinforcing rules that were completely arbitrary---they insisted girls wore skirts Just 'Cuz God Said So and nobody ought be questioning God's Rules. Certainly not a cute little upstart like myself.
By the time I went to University in 1970, enough girls had complained about frozen thighs that the dress code changed. Suddenly, the world was my oyster---I was allowed to wear pants! But there was a hitch: only if my pants were part of a pants suit. Levis were still forbidden. Levis were for boys and pant suits were for girls and that's the final word on covering legs.
A few rebel-types snuck into lectures with their father's cast-off jeans on and risked being fined for disobediance. Finally, (though it didn't happen when I was in college) girls were granted Levi Status because their persistent rebellion was more trouble than it was worth.
In 2008, girls take wearing jeans for granted. They have no idea my dangerous behavior bordering on anarchy, chaos and social destruction, set the cogs in motion for them to avoid tonsilitis in the wintertime. Although I gotta say, I'd like to remind these liberated young women that panties are not supposed to hang out over the top of their britches. Why not?
Just 'Cuz.
Just 'Cuz or Just Cause? That's a question worth pondering.
The Science of Gender and Science:
Pinker versus Spelke, A Debate

Follow-Up Commentary
by other psychologists: Nora S. Newcomb, David Haig, Alison Gopnik, Diane F. Halpern
If you have the time and the interest, read through the excellent commentary about this Harvard Debate. I think it's important to take advantage of Internet access and educate ourselves whenever we can. And don't be intimidated by academic/scientific dialogues and theories.
If you don't understand some of the psyche terms, refer to the Psychology Glossary linked on my blog. It's like learning another language which we're all capable of doing if we make the effort. Ight-ray?