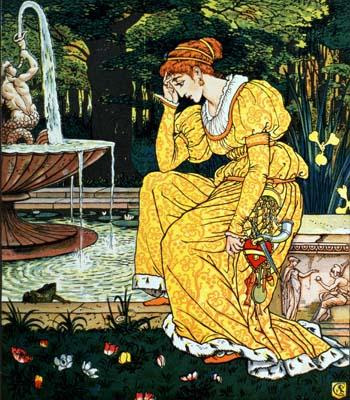 The Frog Prince by Walter Crane, 1874

This is a Link to brief video of Elizabeth and John Edwards discussing the political impact of the Internet. Poor weather prevented Elizabeth from traveling to New York, so an impromptu conference was set up in her home via Skype video. John arrived unexpectedly and joined Elizabeth's conversation with Andrew Rasiej.

Andrew concludes their dialogue by saying, "The Internet community loves your wife." To which John replies, "Yes, I'm aware of that. I do, too!"

Every now and then, another woman’s story parallels our own to such a degree, we cannot ignore the commonality of a woman’s experience in a sexist world.

And we wake up and we see things we never saw before and we know what we’ve glimpsed is so much larger than ourselves, that we fear our minds will break by acknowledging the truth. We’re chagrined to discover how little we knew about reality. We’re overwhelmed with our inability to change injustice. How do we unravel the strands of a web so tangled, so finely intertwined, that we cannot distinguish the end from the beginning? We're deceptively safe in a cuddling cocoon, oblivious to the dangers of unquestioned assumptions.

Not too long ago, I worked side-by-side with a contractor’s crew, redesigning our home to fit our family’s lifestyle. Every morning at 7:00 a.m., we started our workday together: tearing down walls, redesigning walls, building walls, spackling, painting, varnishing. I sweated with the best of the boys. We worked well together. Though our labor was dusty and exhausting, we managed to create consensus, a complimentary team. It wasn’t easy.

At first, the men were dubious about my hands-on involvement. They were as doubtful of my skills as I was of theirs. (I am a woman of vision, dedicated to quality and precision, to be sure!) After several weeks, our initial doubts were replaced by reliance on one another’s expertise. The dream home was becoming a reality. They were pleased. I was pleased. Everyone was pleased with our success; but most especially, we were pleased with our developing friendship.

If the testosterone got too heavy in the kitchen, I figured a way to work with four men unaccustomed to a woman yielding a measuring tape and a paintbrush. After a few months had passed without wilting on my fainting sofa, the contractor pulled my husband aside and said, “We absolutely love your wife!” My husband embraced me and replied, “Yes, I’m aware of that. I do, too!”

Six months into a two-year remodel, I overheard a shocking telephone conversation. My husband was whispering titillating “love me’s” in his soul mate’s ear. He was on the prowl for a woman who knew her place. And that place was beneath him; not at his side.

Every now and then, another woman’s story parallels our own to such a degree, we cannot ignore the commonality of a woman’s experience in a sexist world.

It's hard to admit I logged-in to the following commentary, but it's pertinent to objectification whether women are labeled as ditzes or criticized as nags. Rush Limbaugh is so tickled with himself that he repeats his words just in case we didn't hear 'im the first time:

"We know---we've been told that Elizabeth Edwards is smarter than John Edwards. That's part of the puff pieces on them that we've seen. Ergo, if Elizabeth Edwards is smarter than John Edwards, is it likely that she thinks she knows better than he does what his speeches ought to contain and what kind of things he ought to be doing strategy-wise in the campaign?

"If she is smarter than he is, could it have been her decision to keep going with the campaign? In other words, could it be that she doesn't shut up? Now, that's as far as I'm going to go."

Later, Limbaugh added: "It just seems to me that Edwards might be attracted to a woman whose mouth did something other than talk."

Limbaugh went on to say in a subsequent segment: "My theory that I just explained to you about why---you know, what could have John Edwards' motivations been to have the affair with Rielle Hunter, given his wife is smarter than he is and probably nagging him a lot about doing this, and he found somebody that did something with her mouth other than talk."


Infidelity as a Weapon

What does a narcissist do when a woman becomes her own authority? He cuts her down to size. He has numerous tools at his disposal but the most efficient of all is replacing her with another person. No matter how valuable she felt her 'role' to be, he lets her know that it’s no big deal to find another woman eager to fill her shoes. If the narcissist is especially sadistic, he'll choose a woman who will never measure up to his wife’s competence---a woman who will never threaten his superior status as a maN. In other words: The narcissist trades down, not up. He punishes his wife for being whole.

If his wife was criticized for wearing the pants in the family, he'll shame her for his perceived humiliation. A narcissist will find a way, even if it’s self-destructive, to put an uppity woman in her place. Why? Because a narcissist interprets a partner’s equality as a devious attempt to steal the throne from beneath his royal ass.

I think we miss a crucial truth behind a narcissist’s intentional infidelity. Most people make the faulty assumption that infidelity is all about sex. It’s not. When attempts to control the object-of-his-affection fail, he forces compliance by putting her family at risk. He knows she will subjugate herself when the life she has constructed is threatened; she'll weaken immediately when self-trust in her own perceptions is crushed by his betrayal. She’ll be stunned, if not broken, which satisfies his sadism no matter what his tears lead others to assume.

If his wife dared to be his equal, if she received admiration he felt was his, he will punish her. Maybe he’s not as obvious as the batterer leaving bruises, but he'll batter her in ways that are socially acceptable.

People cannot fathom the hatred seething beneath the narcissist’s unconscious envy. Rarely do people define infidelity as abuse for surely a husband could never envy nor disrespect the mother of his children! It’s strange to even think a man would detest his partner’s competence! The narcissist is no fool though; he has studied people’s reactions and knows his intentional infidelity is socially permissible. In fact, ten bucks says the narcissist predicts (and quite accurately, too) that his wife will bear the brunt of social query. If she was too articulate for some people’s tastes, he knows he’ll get away with attacking her self-worth. If she was too confident, too smart, too self-directed, too intimate, or dared to see herself as his equal, she’ll unwittingly pay a price---a price to be exacted not only by the narcissist, but also by society.

Narcissists have affairs when they cannot mature a relationship into a shared partnership. Assuming a woman to be equal to their superior birthright is a demotion in status, at least in the narcissist’s distorted perceptions. Narcissists don’t share anything. Every relationship in life is based on a superior-inferior, win-lose construction.

If his wife is too ‘full’ of herself, he’ll humiliate her and cut her back to size. He’ll discredit her. Call her a nag, a shrew, a woman who talked too much. Degrade her worth by reinforcing her sole purpose in life: serving men. Whether her service means saving face in public, or using her mouth to save his ego in private.