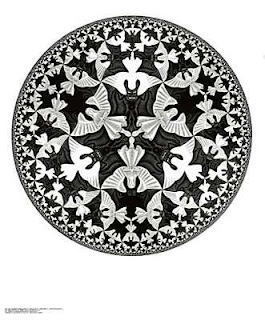 Angels and Devils by M.C. Escher

"The line between good and evil is movable and permeable. Good people can be seduced through that line. Good and evil are the yin and yang of the world.
"Evil is the exercise of power to intentionally harm people psychologically, destroy them physically, and commit crimes against humanity." ~Philip Zimbardo
"So instead of asking who is responsible, Zimbardo asks what is responsible. Psychologists generally understand the transformation of human character as dispositional (inside the individual) or situational (external), but Zimbardo argues that it can also be systemic, and that's what happened at Abu Ghraib." ~excerpted from "How Ordinary People Become Monsters or Heroes" by Philip Zimbardo