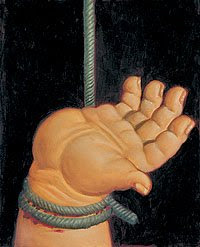 "Art is a permanent accusation." ~Fernando Botero
November 11, 2006, Margot Adler writes: "Fernando Botero's portraits and sculptures of happy rotund people have delighted millions. But the Colombian painter and sculptor's latest exhibition takes on the subject of Abu Ghraib. After reading news reports of American abuses at the Iraq prison, Botero produced works unlike anything he has done before.
A collection of some 50 paintings and drawings at the Marlborough Gallery in New York depicts prisoners as they are beaten, sexually abused, blindfolded, hooded, bound with ropes, attacked by dogs and forced to wear women's underwear.
After he read Seymour Hersh's account of the prison abuses at Abu Ghraib in The New Yorker, Botero found himself obsessed.
"I was... in shock like everyone else in the world was, the more I read about it," Botero says. "Somehow I was more and more upset with the situation."
For 14 months, Botero worked exclusively on drawings and paintings related to Abu Ghraib. He created about 100 works, some of them large paintings, as well many drawings. About half of the total collection is at the Marlborough Gallery.
Botero says he did not use any of the famous photos of Abu Ghraib for inspiration, but relied only on the texts of news articles.
"Some people think that this is more dramatic than the photos, and perhaps it is true," Botero says. "Because, when you paint, everything that is not necessary, you let out. You go to the essence of... the subject." ~ NPR article and audio link (5 minute program)
Three additional resources on Botero's work:
YouTube: A permanent accusation (5 minutes slideshow) Botero writes, "These works are a result of the indignation that the violations in Iraq produced in me and the rest of the world."
Slate.com: Fernando Botero's Abu Ghraib "[It] is precisely the discordance between the cartoonish style of the images and the sordid reality of the atrocities they depict that gives them their emotional intensity. By portraying the Iraqi prisoners as stylized Everyman figures, Botero's pictures do something that even the most vivid photographs of torture don't do: They encourage us to identify with the victims."
YouTube: A conversation with Fernando Botero at Berkeley University "Organized by the Center for Latin American Studies, these paintings have never been displayed in a public institution in the United States. The exhibit was "proposed to many museums in the U.S," according to the artist, but all declined to show it...Berkeley University was first public showing of Botero’s work."
Posted by CZBZ at 10:03 AM