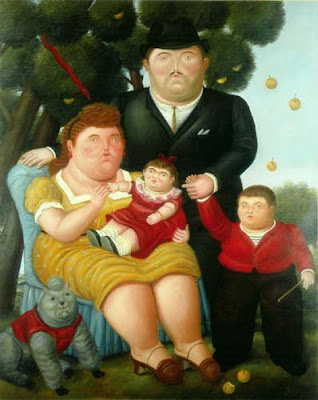 The Family by Fernando Botero

"Clinicians find that a narcissistic parent often tends to report less problems with their child in order to minimize their own narcissistic injury." ~Research article link

I suppose it’s shocking to be told your genes weren’t exactly stellar and your kids inherited physical or mental or psychological problems because your genetic make-up was subnormal. Yea, I know this is hard on people because as soon as they find out their child has a problem, they whip out the genealogical charts to pinpoint exactly who’s great-grandpa was a scalawag and who’s great-grandmother was locked in the attic during a full moon. The blame has to go somewhere I suppose. It’s far better to scapegoat the dead and buried since great-grandpa doesn’t likely care what his progeny thinks about his sperm. And as far as great-great grandma goes, any extra eggs she had were sold at the farmer’s market.
I’ve found it rather difficult to write about narcissistic parents who were incapable of meeting their children’s needs. First of all, what do children need? Shelter, food, clothing, and a group of people they ‘belong to’? My brother’s an attorney and he tells me that as long as the kids go to school, have food in the frig and a bed to sleep in, their needs are being met and the law is satisfied. I’d imagine plenty of overworked and harried parents view child-rearing the same way. Still, we ought consider a child’s needs as extending beyond rudimentary provisions in order for them to grow up lively, compassionate, eventually becoming fully developed human beings. Needs like that supercede what might have passed as good-enough parenting back when grandpas used wiry willows and grandmas slapped naked knuckles with canes.
I think about stuff like this all the time. Well, not all the time but once in a while. Like when I’m in the mood to be realistic about the state of the American family in the 21st century. As deficient as my parents were in giving me the perfect childhood, as inept as I was to give my children the perfect childhood, I wouldn’t trade places with my 19th century cousins working textile mills for sixteen hours a day without a bathroom break. I don’t suppose they were worried about fully developing their emotional, psychological and spiritual life either. Just life. Just keeping a pot of beans on the burner for the kids they put to work as soon as they were potty-trained.
Kids were assets to the family back then and as long as we’re talking about narcissists not meeting children's needs, I figure all of us have a whole rash of narcissistic ancestors making it hard to break familial patterns that are no longer relevant to group survival.
I remember as a young mother when my children were having problems fitting in with other kids because they both had issues requiring intervention of some kind. Mine, or the doctors; something had to be done so they could grow up with a modicum of self-respect. Other kids can be so cruel you know. I reflect on those idealistic years back in 1970 when we were dismantling the old way for a new and better way to raise kids. It was tough. If the old way was no longer appropriate, what was?
I picked up a book called P.E.T. (Parent Effectiveness Training), which probably saved my kids from intense psychoanalysis. Not that they’re without their challenges having grown up with two parents who had entirely different philosophies about child rearing. I tell them today that at least they have two examples to choose from: a mama who gave them what they needed and papa who gave them what they wanted. Anyway, that’s how they sum up twenty years of parental clashes over consequences, neglect, and enabling. I’m glad they saw their parents argue when I disagreed with my husband and he with me.
That’s because in 2009, everybody knows that I was right and he was wrong.

P.S. "Clinicians find that a narcissistic parent often tends to report less problems..." I hate to criticize the writer quoted at the top of my message, but my kids will tell you that their mother is a stickler when it comes to proper English and maybe I make a lot of mistakes but when other people do, I don't mind correcting them. The rule is: Use FEWER for things you count (like problems) and LESS for things you measure (like narcissism).
Just sayin'...
Hugs,
CZBZ
Posted by CZBZ at 4:23 PM