Why I Write About Parenting 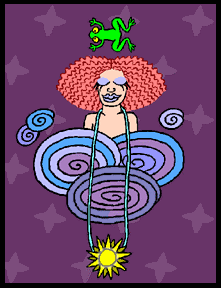 What do children need? How many of us become parents without knowing what children need from their parents in order to thrive? As a young mother, I figured all I had to do was follow my parents’ footsteps and dutifully improve on what they’d done. Which, as a twenty-one-year-old rather-cheeky mother, didn't seem like that big of a challenge.
Like a lot of 1960's Mothers-In-Training, I was absolutely sure, LIKE TOTALLY DUDE, that psychology books, consciousness-raising sessions, and my Aquarian Love Bug Enlightenment would eradicate dysfunctional patterns of my unconscious another-brick-in-the-wall ancestors.
I suppose it’s reasonable logic to believe we can do better than the generation before. A fair supply of confidence is required for anyone taking on the parenting role. Still, whenever I run across a decades old journal entry, it makes my face burn red. Did I really think that way? Evidently. The proof is in the scribbling. Then, I smile at my optimism, self-certainty, and yes, innocence.
There's a lot to be said for healthy narcissism. To believe we can make a difference. To trust ourselves to figure it out as we go. To assume that despite dysfunctional childhoods (and aren’t they all?) we can do better than our parents. To muster up enough courage to TRY and try again and get back up and TRY one more time while we slowly accept our imperfection. I remind myself all the time that mistakes are the bedrock to humility; humility is the foundation to being teachable. If we didn’t believe in our ability to learn, unlearn and relearn, nobody with an ounce of awareness would ever agree to have kids. You need to be kinda young, kinda hopeful, kinda cock-sure of yourself to procreate. Maybe God planned it that way? We don’t realize what we’ve gotten ourselves into until it’s too late. When we realize we’re in way over our heads, we start relying on God to get us out of the mess we got ourselves into.
You know, when I reflect on my naiveté thirty-some years ago, it makes me laugh so hard my tummy jiggles. It didn’t used to jiggle when I laughed hard but it does now. That might also be God’s plan to stop an old woman from procreating when she shouldn’t be.
So why am I writing about PARENTING on a blog called The Narcissistic Continuum? Do I pretend to have answers to the myriad problems inherent in the narcissistic family construction? O hell no. I’m ancient enough to be wise to myself by now. I know I don’t know; however, I know I know a lot I didn’t even know I knew back when I thought I knew it all and didn’t. If that makes sense.
My intention in writing about parenting is to encourage other folks who didn’t have a clue as to why it was so damn hard to be a good-enough parent. I hope that while we’re taking super-responsibility for every iddle and piddling mistake we’ve ever made, we also recognize the countless things we did that were ‘right’. It’s easy to spot our inadequacies. It’s easy to feel defeated and self-blaming. It’s easy to berate ourselves for not knowing what we couldn’t have known; for not realizing our highest priority was serving our children’s best welfare---not the needy narcissist’s.
Oh, I’ve been down the self-castigating route, almost hating myself for being such a Pollyanna and not heeding warning signals that something wasn’t quite right in the master bedroom. But you see, my heart was so big and my hopes were so high and my desire to create a happy family was so powerful that I could not see outside my own beliefs. When I learned about the narcissistic family system, I felt completely retarded to have tried to do the impossible: teach a perfectly grown-up person how to parent. What was I? A masochist?
Partnering with someone who did not have the same maturation capacity was like dishing up ice cream cones in Satan’s fiery hell. The cones melted faster than I could shape ‘em, and rather than getting our family out of hell, I just kept scooping ice cream faster and faster. Before I knew it, my spouse was lining up with the kids and calling me "mama".
My heart goes out to all of you who tried to do the impossible: over-compensate for a partner’s inadequacies. You probably attempted to create a healthy balance by giving more and more of yourself until you were so depleted of energy that you gave up. You settled. You no longer believed you could make a difference. You didn’t counter your partner’s behavior because prior attempts had proven temporary. It’s natural to blame the non-N parent for not doing more to protect their children, but nobody blames the non-N parent more than themselves. To tell y’all the truth, I do not know of ANY Parent in this whole Dad-Blasted freakin’ world that tries harder to do right by their children than the partner of a narcissist.
Parenting with a narcissist is a major downer. A real bummer. An all show and no go exercise in futility.
Now that I’ve suffered a few years of sorrowful regrets, agonizing about what I didn’t do, I’m dredging up all the good things I did do. There were numerous times I stepped up to the plate and those are the times I’d like to write about because they give me hope and remind me of the spiritual values underlying my behavior. Did I meet all my kids’ needs? Likely not. But I kept trying. How better can any parent meet their children’s needs than to never give up trying?
The miracle of the past thirty years is that even though I was clueless about pathological narcissism, I still dished up ice cream as fast as I could. And that’s really cool.

Hugs,
CZBZ
Resources:
The Narcissistic Family: Diagnosis and Treatment by Stephanie Donaldson-Pressman and Robert Pressman. "Narcissistic families have a parental system that is, for whatever reason (job stress, alcoholism, drug abuse, mental illness, physical disability, lack of parenting skills, self-centered immaturity), primarily involved in getting its own needs met. The children in such narcissistic family systems try to earn love, attention and approval by satisfying their parents' needs, thus never developing the ability to recognize their own needs or create strategies for getting them met. By outlining the theoretical framework of their model and using dozens of illustrative clinical examples, the authors clearly illuminate specific practice guidelines for treating these individuals." (Amazon Link)
Posted by CZBZ at 1:12 PM