None of us is as dumb as all of us 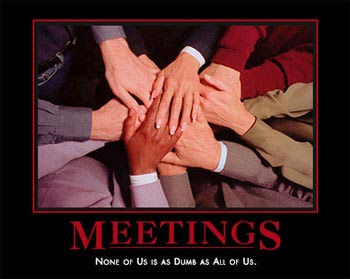 Reference Post: Some days, all you can do is cry

“As Freud put it: 'The feelings of a group are always very simple and very exaggerated, so that a group knows neither doubt nor uncertainty.'"

Meetings. Groups. Town halls. Family reunions. Chapels. Wherever people of like-mind gather together, the potential for evil is present. Group dynamics foster situations so powerful that unconscious forces compel us to behave in ways we would never do without feeling ‘safe’ within our group.

This post is not about deifying liberalism or demonizing conservatism. What this post is about is self-awareness protecting us from destructive (regressive) behaviors naturally arising from group allegiance. The past few years on message boards have reinforced for me the value of group participation when like-minded or like-experienced people become stronger through group affiliation. We come to know ourselves as individuals, connected to---and yet---separate from, the group.

Group participation can make us smarter by challenging our narcissism and increasing our awareness so we look outside ourselves beyond the narrow scope of self-preoccupation. Groups can also, as the above picture suggests, make us dumber: rigidify our narcissism; increase our defenses; narrow our information pool resulting in short-sighted and erroneous decisions. The more fragile our core self (immature narcissism), the more we view difference as a threat to the ‘self’, projecting demeaning attributes onto anyone with a different point of view. In a pathological definition, normal projection can escalate to ‘otherizing’, thus justifying inhumane treatment in the pretense of self-righteous morality.

Tell me what I want to believe

"Informative conformity often occurs in situations in which there is high uncertainty and ambiguity."

The more like-minded the group, the bigger threat we are to ourselves, so certain are we that our perceptions and beliefs are correct. When friends and family contradict our worldview, we retreat to the private safety of our oh-so-certain narcissism. When we only listen to talk shows corroborating our favorite illusions, when we only speak with people who validate our beliefs, when we homogenize ourselves in group certainty/superiority, we are vulnerable to self-deception. The truth is that the enemy is not out there, the enemy is within.

Group affiliation fosters an illusion of certainty if we isolate ourselves from conflict and break essential connections with others.

As Warren Poland writes, “…too often in the service of the self, we develop allegiances to our narrow views.” Diversity prevents polarization. Any group disrespecting difference through implicit or explicit ‘otherizing’, fertilizes the soil for destructive groupthink to take root and to flourish. A wise leader nurtures dissent as a beneficial means to healthier and better decision-making. A healthy leader encourages differing viewpoints, which curtail extremist and shortsightedness by minimizing self-righteous/narcissistic certainty.

The pathology of Otherizing

We define ourselves as a group by our similarity of thought, experiences, and beliefs. We differentiate ourselves from other groups in a process called ‘othering’. Othering is not pathological when members extend dignity and respect to those who have a different ‘voice’ from their own. But sometimes in our attempts to coalesce as a group, we lose ourselves in a rigid process of othering that includes projection of disowned qualities onto ‘others’.

The first video on my prior post illustrates the dangers of groupthink, polarizing fellow citizens into ‘us or them.’ Once an us or them polarity has rooted in our imagination, interaction is increasingly adversarial. There is no cooperation, no mutual understanding, nor sharing of opinions. People dig trenches for open warfare, ridiculing and even humiliating ‘the enemy’: enemy being defined as anyone with a different worldview. What is being threatened by this difference is one’s narcissism. The narcissistic belief that ‘we’ are right and ‘they’ are wrong; that ‘we’ are moral and ‘they’ are not; that ‘we’ are the answer and ‘they’ are the problem. Once someone has been pathologically otherized, we are no longer obligated to empathize, nor behave responsibly because ‘they’ do not merit our respect. The Other has become an enemy.

I’ve watched this polarity escalate over the years, especially as Americans become intolerably uncertain, fearful, anxious; our trust in traditional structures eroded by rapid change. We want to stop losing even more ground than we already have but recognize our limited power as an individual. We join a group aligning best with our beliefs and hope our contributions will make a positive difference. This like-mindedness with others is mutually beneficial. Commonality increases self-esteem, alleviates helplessness, hopelessness and despair. Group participation directs our energy and skills towards goals we believe will correct the errors of the past. However, we must be aware of our need for groups while remaining alert to unconscious defenses degrading prideful membership into hubris and disdain for others.

Loose Cannon or a 'planted' Land Mine?


“There are advantages to being slightly more extreme than the group average. It’s a way to stand out, to ensure others will see us as righteous group members.”

Like-mindedness may amplify animosity towards others (other=anyone threatening our identity). Members may be geared towards proving their loyalty to the group by scapegoating ‘the other’. In a twisted perversion of loyalty, aggressive/bullying behavior proves a member’s devotion to the group, an unhealthy form of image maintenance.

The interesting thing (as evidenced by the video clip) is that fellow bystanders were reluctant to counter the bully’s aggression. Social psychologists have observed and documented the Bystander Effect numerous times. People are reluctant to take action, even in life-threatening situations. The greater the number of people, the less likely an individual will intervene.

In this particular video however, were bystanders reluctant to intervene for fear of being ostracized? Would their intervention be viewed as betraying one of their own? Maybe it’s fair to say bystanders were reluctant to ‘rock the boat’ because they wanted to be seen as team players---even if they were uncomfortable with some of the team’s behavior. I am sure most Tea Partiers were uncomfortable when a team player humiliated a disabled man by throwing dollar bills in his face. The whole point of the dollar bill incident, at least in my view, was humiliation---a projection of the man-in-a-white-shirt's humiliation onto someone else now that his power and privilege in our society is melting faster than Alaskan glaciers! (Not that I can presuppose knowing what this man-in-a-white-shirt was feeling prior to acting like a bully on the playground though I’m certain we would not have gotten along, even in my six-year-old days).

When someone behaves aggressively, group members ought question precedents leading to behavior that is assumed, by the bully, to be acceptable even heroic! Unfortunately, what generally happens is the bully is viewed as a loose cannon, a freak incident, someone losing control in the excitement of the moment. There is no doubt in my mind that were a fellow liberal to throw dollar bills at Sarah Palin, he would be given the same benefit of the doubt conservatives gave the bully in the teapot. We are much more generous in our perceptions of fellow members of our own group. Thus, the situation escapes scrutiny as the group ignores precedents creating a volatile situation. They may even scapegoat the aggressive member as an anomaly. But you have to ask yourself the question: would this man have behaved the same way if he were by himself? Would he have behaved aggressively if he were in a diverse group tolerating opposing opinions? How much power did the situation have over the man-in-a-white-shirt? And who bears responsibility for his aggression?

“No one raindrop thinks it caused the flood"

Group leaders own responsibility for cultivating the environment, appealing to member’s emotions by stereotyping other people, thus creating pathological ‘otherizing’.

Group members bear responsibility for standing by and doing nothing. It was obvious in the video that some members were uncomfortable with man-in-a-white-shirt’s aggression though they did not confront the aggression, at least not in the widely circulated video.

We could examine the man with Parkinson’s Disease and ask why he felt compelled to attend the gathering? Did he hope people would empathize with him, broadening their view of social responsibility? I suppose that would be my interpretation of his motives. But then again, I am a bleeding heart or so my conservative friends and family suggest when needing my listening ear and compassionate support.

Situations of us-ness have the potential to make us wiser or regressively dumber. It's important to learn about the situational impact of a group on our individual reactions. It’s imperative to recognize Us-ness as a healthy connection while also protecting ourselves and others from the disconnecting power of otherizing.

Ever mindful of the pack,
CZBZ

Gale Warnings. Stormchild has written many blog posts about the dangers of groupthink. She was my mentor, encouraging further studies about the destructive and the creative power of 'groups'.